In 2021, Morella executed an earn-in agreement with ASX listed Sayona Mining Limited (ASX:SYA), for the right to earn a 51% interest in the lithium rights of Sayona’s Pilbara and Gascoyne lithium portfolio.

The interest will be earned through completion of exploration works on the tenements. The tenements are centred on the world-class Pilgangoora, Wodgina, Tabba Tabba and Mallina mining districts. Morella’s immediate focus is the Mallina tenement, which has been subject to previous exploration and study work. The Mallina Lithium Project (E47/2983 tenement) “the Project” (Figure 1), is located 110km southwest of Port Hedland and is accessible via the North West Coastal Highway. 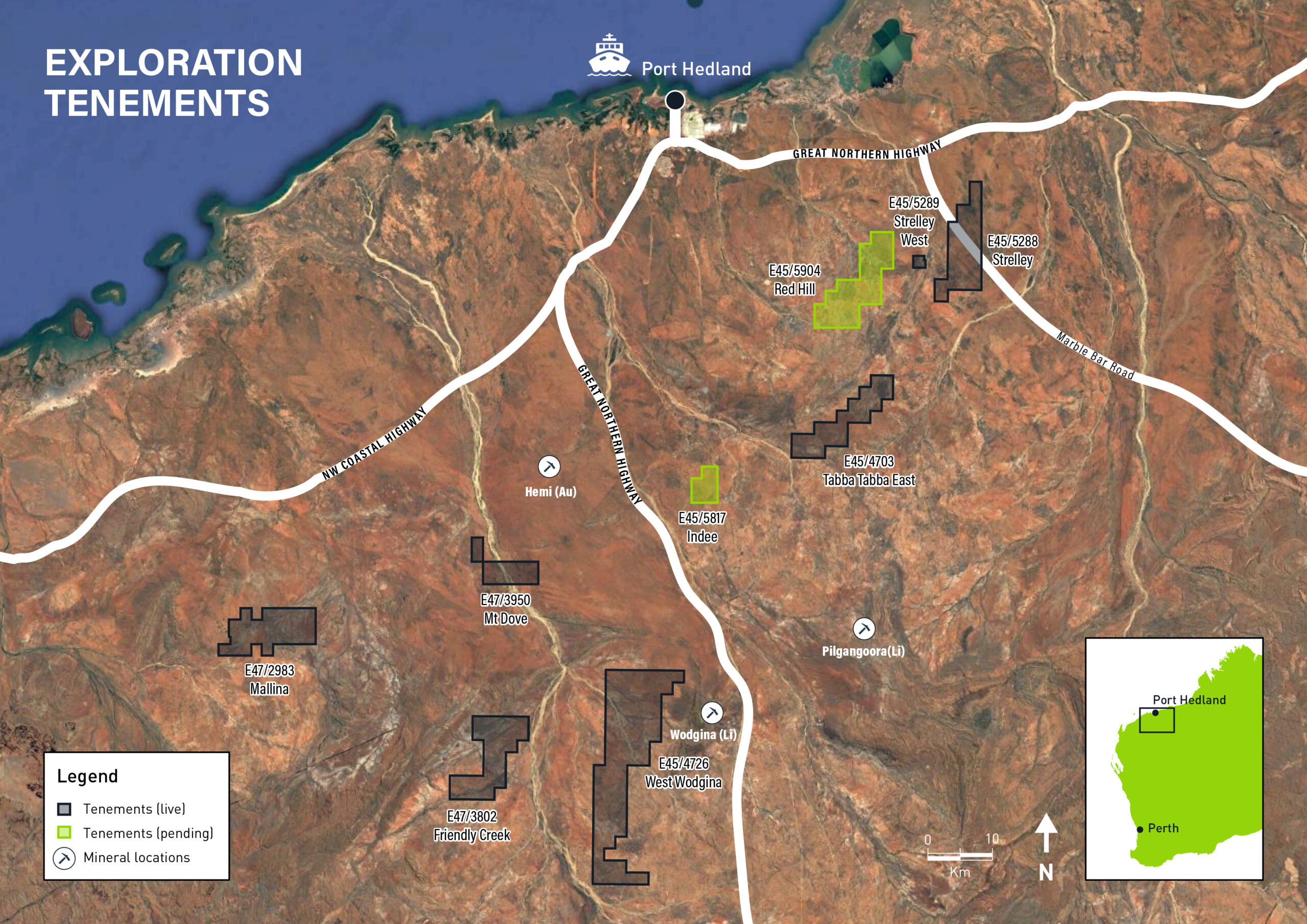 The Project is located within the Mallina Basin, a 70km wide basin that extends in an east-west orientation for almost 140km along the central Pilbara coast. There is limited bedrock exposure in the region, however historical exploration, mapping and study work indicates the presence of potential subsurface mineralised structures within the Project area.  The Mallina Basin can be seen in Figure 2. 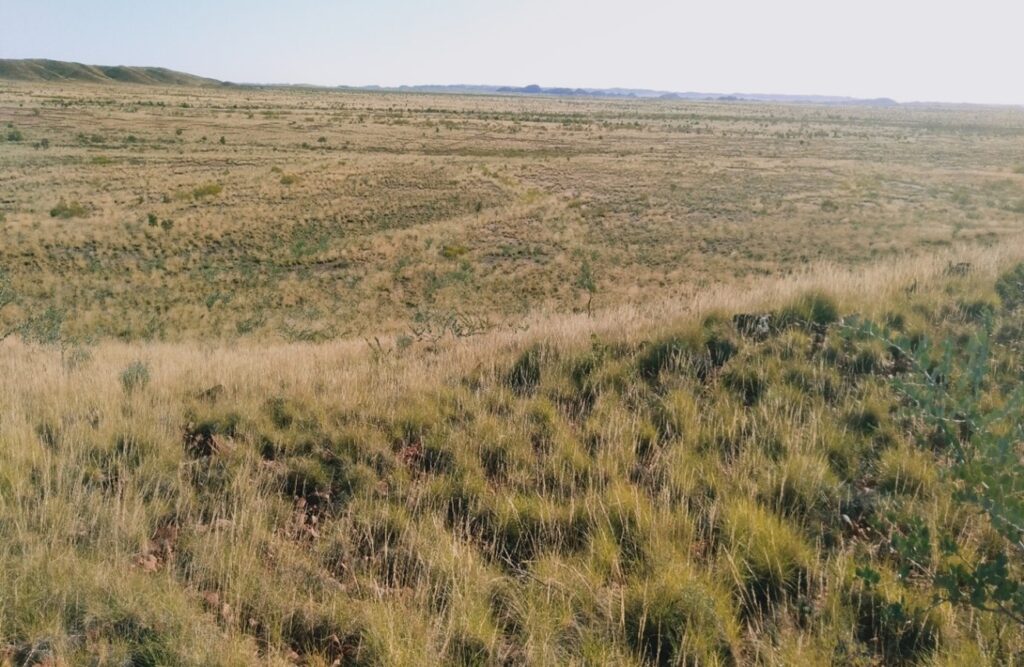 The spodumene-bearing dykes at Mallina (an example can be seen in Figure 3) are recognised as composite or hybrid intrusions of early monzogranite and latter aplite phases. These phases are typical late phase components of the Split Rock Supersuite, which is considered the fundamental control on the formation of rare-metal pegmatite systems across the region. 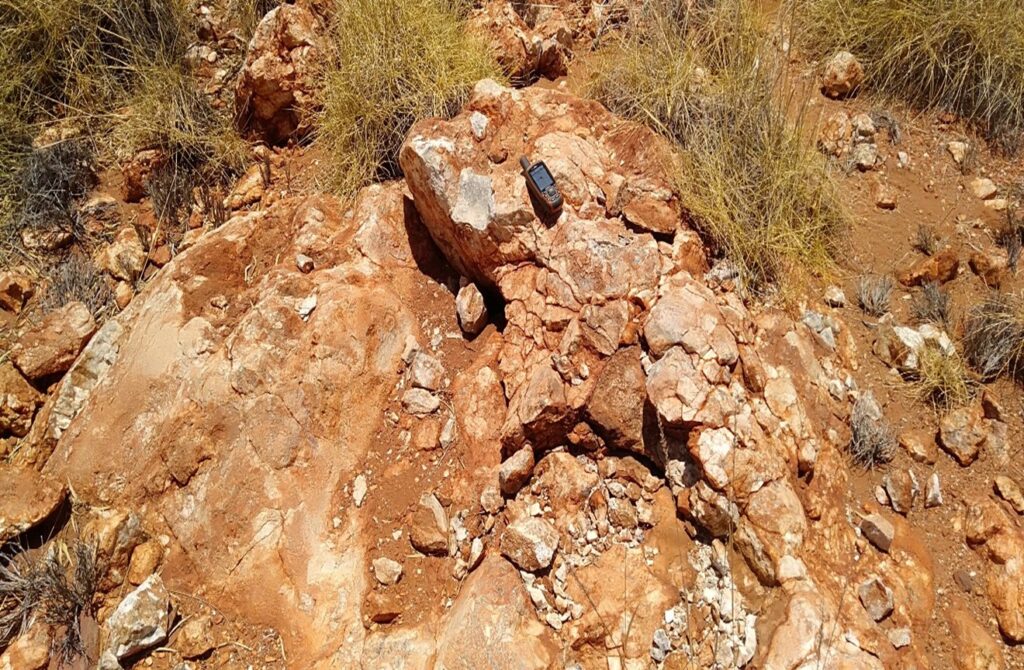 In 2021, Morella executed an earn-in option agreement with US-based Lithium Corporation (OTC:LTUM), for the right to earn a 60% interest in the Fish Lake Valley Lithium Project “the Project”. The interest will be earned through completion of exploration and development work over a number of years. Morella has further rights to acquire up to a 100% interest in the Project.

Located in Esmeralda County, west-central Nevada (Figure 1) the Project covers the entire Fish Lake Valley salt playa area and is 30km north-west of Albemarle’s Silver Peak Mine and 20km west of Argosy’s Tonopah Lithium project. Importantly, the Project is located in a known lithium producing region of the USA and presents an excellent exploration and growth opportunity for Morella.

The Project is approximately 60km from the town of Tonopah and is equal distance (approximately 280km) to the major Nevada cities of Las Vegas and Reno. Tesla’s Nevada Gigafactory is 37km from Reno. 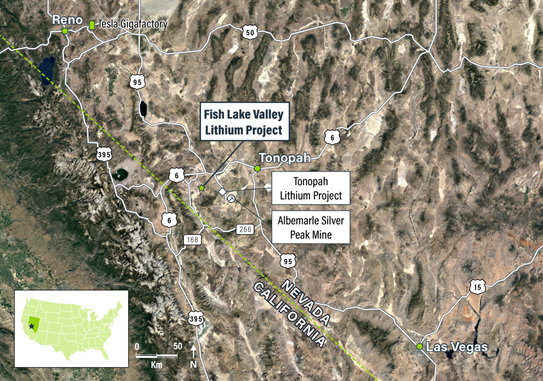 Fish Lake Valley is located on the western margin of the Basin and Range province, within “Walker Lane” which is a zone of Miocene structural deformation that trends northwest to southeast, paralleling the trend of the Sierra Madre Mountains in Eastern California.  Basin and Range faulting began during the Miocene and it is this tectonism that is responsible for the formation of the Fish Lake Valley Basin.  The most prominent structure is the Furnace Creek Fault Zone (FCFZ), which is a north westerly trending right lateral or dextral fault.  The Fish Lake Valley Fault Zone lies at the northern terminus of the FCFZ where a classic “pull-apart” basin was created which is responsible for the locally thick deposition of Quaternary sediments and most likely gave rise to the deep fracture permeability that was critical in the formation of the geothermal systems associated with mineralisation.

There has been considerable sedimentation in Fish Lake Valley, with abundant clays, silts, sands and gravels transported from the hills surrounding the basin.  The valley fill sediments can be quite thick in some basins, although it is thought that they are only moderately developed (300-600m thick) at the northern end of Fish Lake Valley given the historic borehole and gravity data available.

Historical work completed by third parties on the Project has been independently reviewed by Morella’s Competent Person. The historical exploration activities identified an area at the north end of the northernmost salt playa, approximately 2.0km wide by 3.2km long, where lithium values in brines are more than 50 mg/L, along with elevated boron and potassium levels.  This anomalous area encapsulates a more enriched zone which measures approximately 1.4km by 1.6km.  Within this enriched zone lithium-in-brine values range from 100 to 150 mg/L, with boron ranging from 1,500 to 2,670 mg/L and potassium from 5,400 to 8,400 mg/L.

Exploration work completed to date indicates that there are anomalous concentrations of lithium, boron and potassium mineralisation in the sediments and brines present within Fish Lake Valley. There are known geothermal resources in the vicinity of the playa, which are linked by fault structures thought to be the conduits for the mineralised fluids within the playa that have provided elevated levels of lithium, boron, and potassium. The geological and geochemical conditions present in Fish Lake Valley are favourable for the formation of a lithium-boron-potassium-in-brine type deposit. The salt playa can be seen in part in Figure 2. 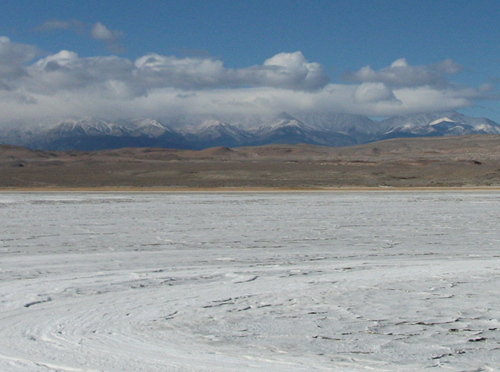